“MY P.O.V – Getting ahead in the film industry” by Ross Tinney

I’ve been a director and have over thirty plus years experience in the film industry. So I wanted to give real life advice to students and graduates about the ‘art of communication’.

Moreover, for years I have felt there is a sea of students out there with all the theory, all the knowledge and passion but with absolutely no idea how to move from study to reality. 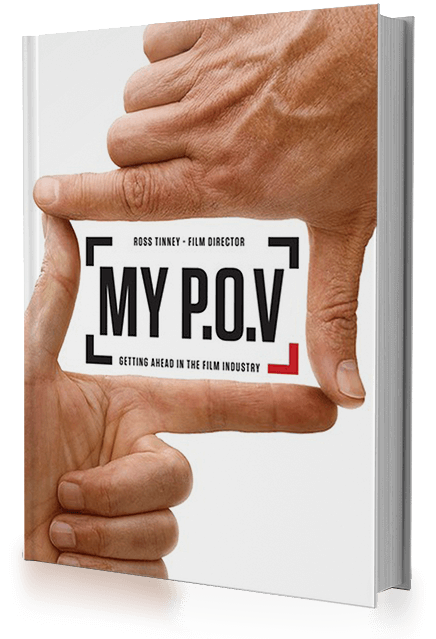 What is Ross Tinney’s book “My P.O.V” about?

The book is about how to get into the industry, who and how to talk to people, what to show them, how to make what you show them, how to manage expectations, to handle rejection and conflict. Hence, it’s all good common sense tips from every department for the film & media student, or the passionate filmmaker wanting to view the way forward.

First of all, I have gathered together some amazing interviews with a whole bunch of local and international successful creatives; directors, producers, grips, writers, visual effects artists, editors, cinematographers and more. These include Matt Eastwood, Aussie boy and former Worldwide Chief Creative Officer at JWT; Perth Producer Sue Taylor, whose film “The Tree” featured as the closing film at the 2013 Cannes Film Festival; Mark Renton, from Townsville Australia and for years the go-to Special Effects Supervisor in LA (Minority Report, The Curious Case of Benjamin Button, etc); another Aussie boy Andrew Rowlands, now a steadicam operator in Hollywood (The Departed, Gangs of New York, etc)  and energetic offline editor Josh Canalini, starting in Perth and ended up working on The Hobbit Trilogy at Weta Digital in NZ.

Furthermore, it’s all about how these people followed their dream and sharing their experience. Because it didn’t happen for any of them overnight, but it did happen. Certainly, they worked bloody hard and used some solid life skills to get where they are. So I have transcribed their wonderful experiences and dotted them throughout”.

Hopefully, this book will help bridge the gap and make a difference to the next generation of communication creatives.

This video is all about Ross Tinney’s book “My P.O.V” –  some insights into its contents,  how he came write it and the passion behind it.  Enjoy the video, enjoy the book. Any feedback would be much appreciated. I’ve finished your book. What a great read.

Actually, that’s the first thing that struck me – how readable it was; how it felt like a wise old buddy talking to me, as opposed to an arrogant old has-been lecturing me.

So that style made it easy for me to consume the information. And there is a lot of that. You really have covered the critical areas of advertising creativity and film-making well.

Like your intro says, it’s not so much the technicalities of film-making but the human side – the importance of relationships and respectful behaviour. I love all that cos I think our industry needs it more than just pure artisan skills.

So well done! I’m impressed by anyone who has the passion and commitment to write an entire book, but I’m especially impressed when that book is readable, useable, helpful and wise.

‘A lot of people never use their initiative because no-one told them to.’

Happily, Ross Tinney isn’t one of them.

What little I know about making films, I learned mainly from people like Ross. Unlike other places in which I have worked – London, America, India – and other parts of Australia, the film industry in Western Australia is not unionised and comprises freelancers in the main. What Ross does not say – at least, not in as many words – is that it is the generous nature of freelancers – grips, gaffers, focus pullers, boom swingers, best boys and so on – to offer more, to think more and to do more – because their future depends on it. Today, it would be called ‘value-adding.’

Many years ago, in the UK, I once saw a union shut down an entire film set because the talent connected and switched on an electric heater – a task that so enraged the best boy (electrician), he called the film crew out on strike for the day. [Of course, he was right. Only the best boy knew how the circuit was wired and what load it could tolerate]. Having read his book, I can’t imagine that such a thing would ever occur on one of Ross’s sets.

Besides the gracious sharing of more than thirty years knowledge and experience, his book throws a deserving focus on communication, understanding and relationships – how to get the get best out of crews, talent and post production personnel. Plus, he provides valuable advice on working out the difference between what is said and what is meant. But above all, like any commercials Film Director worth his salt, he honours the idea above all else – something that every copywriter I know, holds dear.

I wish his book were around when I started out as a lowly copywriter, (something which I remain to this day). I may have made fewer errors, better commercials and happier clients.

When I read his book, I could hear Ross’ voice complete with his Kiwi accent and idiosyncrasities. It made me wonder why nobody had written a book like his before. Over the years, I have been privileged to have worked with – and learnt from many of those he interviewed – Matt Eastwood, Simon McQuoid, Murray Edwards, Kim Buddee, Glen Dillon, Greg McNeill, Andrew Rowlands and Tim Count. I count myself fortunate to know Ross personally.

‘War And Peace,’ his book is not. But if you’re starting out in the advertising or film industry or you are a student, you could read My P.O.V twice over in the time it takes to fly from Perth to Sydney. It is such an easy read. And you should because knowledge is precious, experience is priceless and blokes with initiative like Ross are rare.

‘No-one has written about this before. I have learnt so much from this book. It is amazing.’

‘Ross’ book has a great deal of humour and down to earth practical advice. His refreshing and authentic honesty and passion not only for his work but his desire to help newcomers to the industry is evident in his writing. Anyone wanting to get ahead or even get a break in the film or TV industry would benefit enormously from reading this book.

Some extra words about the book

My Book | Part One

Call it Part One of many more. My book is about how to make it in the film industry. But really, you could take me and my friend’s tips and make it in any field.

How I got started

This is the short version of how I began in the film and media industry. And you could apply my journey to any industry you are planning to enter. It’s all about creating a point of difference, to position yourself ahead of your competition. 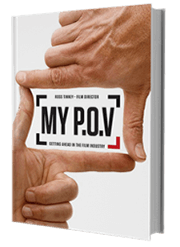