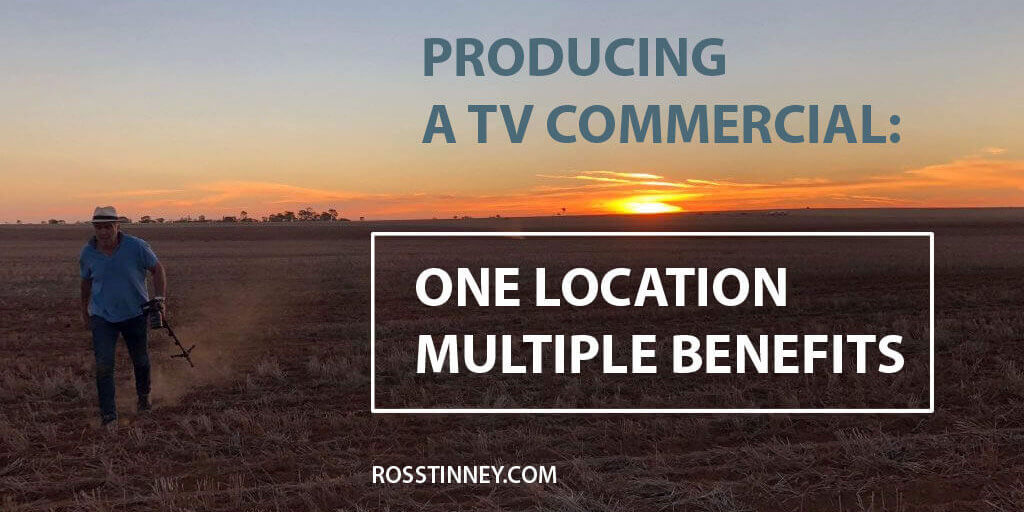 It’s always a juggle when doing a reccy – searching for the best locations for your film. You are constantly balancing the cost of each location, with each location’s access and amenities (or lack thereof) and the distance between them.

Invariably, you never have the perfect balance. There’s always some shots that need to be revised, or at worst, deleted because you can’t find the right location that answers the brief.

So it is important, when going out on a reccy, that you adopt an extremely open mind, constantly looking for ways to streamline your schedule and in so doing, preparing for a more efficient shoot that ends up on time and on budget, without creative compromise.

And one of the really clever ways of achieving this is enabling one location to offer multiple benefits.

An example of smart use of a location

STOP PRESS! I just want to clarify the word reccy. It is a shortening of reconnoitre or reconnaissance, but can come in many abbreviated forms, like reccie or recce. Onward.

A few weeks back, I was doing a reccy in preparation for a TV commercial shoot. A one day shoot, two commercials (yes two), on the RED camera (check out my video production gear), utilising two client homes in two locations, an hours drive apart.

Both commercials were quite simple, with a clever idea attached.

The same Mum, Dad and two young children would appear in both commercials. We were to shoot one commercial in the kitchen of one location, the other in the main bedroom-ensuite of the second location.

There was 12 on the crew and it was going to be a long day.

But we didn’t really have a long day budget. Things were tight.

Reviewing locations when the client has already approved it: why?

We looked at location one- the kitchen was perfect. While we were there we checked out the bedroom en-suite. That too was fine. It was a great back-up.At that point, we planted the seed with the advertising agency, (who was also on the reccy), with the notion of shooting both commercials in one location. That was going to be a long shot, as the client’s bedroom preference was an hour away.So we drove to the second location. Yes, the bedroom was the client’s favorite and yes it was workable but the distance and time to shoot was another matter altogether.

It is not just about the location. Consider the people and the end result.

As the director, shooting a long day with two adult talent is always a challenge. Keeping performance consistent, along with remembering lines and maintaining continuity with hair, make-up and wardrobe. It’s ongoing.

But getting two 6 year-old children to remain focused, engaged and awake over a long day, was almost a bridge too far, let alone outside the Code of Practice guidelines for filming children.

Be open to options and the results will come

We spoke to the agency. They were on our side. The agency then discussed the issue with the client. The client saw the challenge we faced and agreed to shoot both commercial in the one location.

This was the best result for all stakeholders, and by best result, I mean the end result, the completed commercials. Because sometimes, pigheadedness and and ego can get in the way of crucial decisions like this. ‘That’s not what we agreed on’, ‘We signed off on THIS bedroom’. All blinkered reasoning that is often driven by stubbornness, or perhaps the fear of being seen as weak.

But what was shown on this occasion was something that I feel is lacking in everyday life and that is COMMON SENSE. This ad agency has a wonderful work ethic that I admire; to do whatever is best for the job. And in doing so, they have built up a client base that mirrors the same thinking. It’s quite refreshing, I must say. So on shoot day, we shot the kitchen commercial first, then took lunch. This was followed by the bedroom commercial. By this time the young kids were getting tired and, as the commercial starts with Mum on her own, after which the kids join, we decided to shoot the second commercial backwards, shooting all the family scenes with the kids first, followed by the Mum.As a result, the kids got to go home on time, leaving us to shoot the single ‘Mum’ shots. Everyone happy, including the film crew. The result was two great commercials, with the client making zero changes. Gotta love that!

There are many elements to consider when putting your shot list together on a reccy. Just by taking time to look around you…and I mean really look around, plus having your shooting schedule nearby. Then, ensuring that all stakeholders are prepared to be flexible, you’ll end up with a far better result.

Many thanks for taking the time to read this blog.

Let us know if you have any experiences on a reccy. I’d love to hear them.

Here are the two completed commercials we produced.