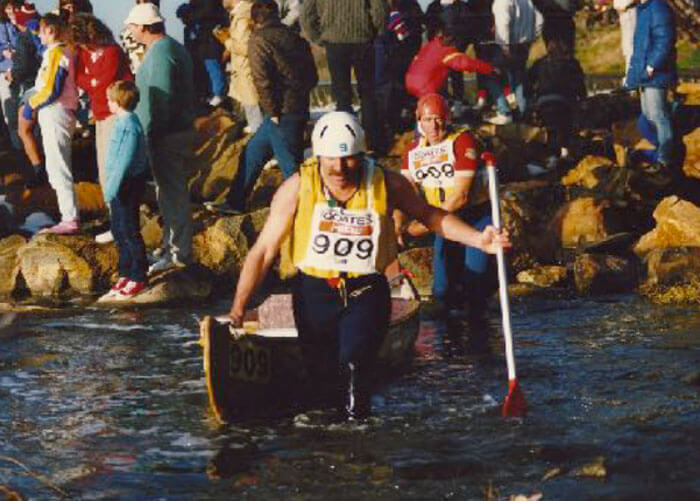 Early on in my life, I found out that persistence and perseverance were pivotal personal values if you wanted to succeed. Here’s a story to illustrate that:

A friend of mine, Greg, and I entered the Avon Descent, a gruelling 153-kilometre boat race from Northam way off past the Darling Escarpment among the wheat belt, down the Avon River to Perth.

For the first day, you are on flat water interspersed with a maze of Ti trees and the odd steep weir.

The second is much more blood-curdling, ploughing through rapid after rapid down the Darling Escarpment, followed by 30 kilometres of boring, monotonous, flat water to the finish line.

LESSON 1: ON PERSISTENCE: DO YOUR BEST WITH WHAT YOU HAVE. EVEN IF IT TAKES FOREVER.

Most entrants are in boats that are fast: surf skis, racing kayaks, and flat-bottomed

Us? Oh, no. We entered in the only boat we had: an old, fibreglass Indian Canadian canoe.

We could have walked faster.

The first year that we entered, we stopped 8 kilometres from the end. “Near enough is good

In the end, we felt that we had some unfinished business.

So we entered the following year, and fell out 40 kilometres from the end, me spraining my wrist after getting pinned under the boat in a rapid. Wimp.

We still felt we had some unfinished business.

LESSON 2: NEVER GIVE UP – DON’T WALK AWAY FROM UNFINISHED BUSINESS. YOUR HARD WORK WILL EVENTUALLY PAY OFF.

We entered the next year…

With dogged determination, we paddled through pain, were dragged over rocks, clung to our upturned canoe through raging torrents, and arrived at the finish line … last … in pitch black, just as they were packing up and pissing off.

We were so proud of ourselves.

So were the event organisers, apparently.

So much so that a couple of weeks later they invited us to the trophy presentation in Northam, where the race started and presented Greg and me with the inaugural Glass Plate Trophy for Persistence and Perseverance.

Taking the lesson to my professional life

If you are smart, you’ll soon realise that life is the best teacher. Then you can learn some things along the way and apply them to other parts of your life. So here’s how I used persistence and perseverance as a film director.

LESSON 3: SURROUND YOURSELF WITH MORE EXPERIENCED PEOPLE AND LEARN FROM THEM

I wanted to be the very best director I could be. So that involved one goal: learning from the best.

Therefore, when I started RT Films, I was focussed on surrounding myself with those smarter and more experienced than me.

I approached experienced DoP’s (directors of photography) to film my commercials, and engaged renowned art directors to design amazing sets. I also represented directors with a really creative eye from around the globe, getting them to shoot in both Australia and for RT Films in Indonesia. This set up RT Films as a production company that showcased quality professionals with amazing reels, something clients and ad agencies loved to hire.

LESSON 4. BE READY AND WILLING TO LEARN FROM GOOD AND BAD EXPERIENCES

The main persistence and perseverance part in running my business was constantly trying new professionals and practitioners on my team, always striving to be the very best. Because while most were absolutely fantastic to work with, giving us a sensational result and happy clients; there were those who were not so enjoyable, were extremely demanding, with little or no respect for time, money and other people’s opinions.

This cost us both financially and emotionally.

No problems. All experiences are good, so long as you learn from them to improve yourself and avoid committing the same mistakes.

LESSON 5. PERSISTENCE & PERSEVERANCE WILL GET YOU A JOB IN FILM… OR ANYWHERE!!

Finally, another example of extremely good use of perseverance.

A dear friend of mine Jo, tells how her persistence and perseverance got her through the door and on a career path to being a TV commercial producer.

I always remember me phoning the video company we used at the ad agency, where I was working as a secretary. When I called they said ‘We don’t have anything at the moment but give us a call back in a few weeks’. So two weeks later, very nervously, (as rejection was highly possible), I called again. “I hope you don’t mind but you mentioned to call back in a few weeks.”

“No sorry, nothing now, try again in a few weeks.”

So I called back approximately every two to three weeks, politely apologising and saying, “I don’t mean to hassle you, but just calling again, in case something has come up?”

After six months they said, “Yes, we have a job going as a production assistant! Talk about persistence–taking a punt–having guts! (It was scary phoning up–I was twenty years old) and I was on my way up the ladder.

That “never, ever quit” attitude that got Jo her job, kept me going moving forward, learning from all my experiences, re-creating myself over and over. I hope it rubs off onto you.