The importance of a sound recordist 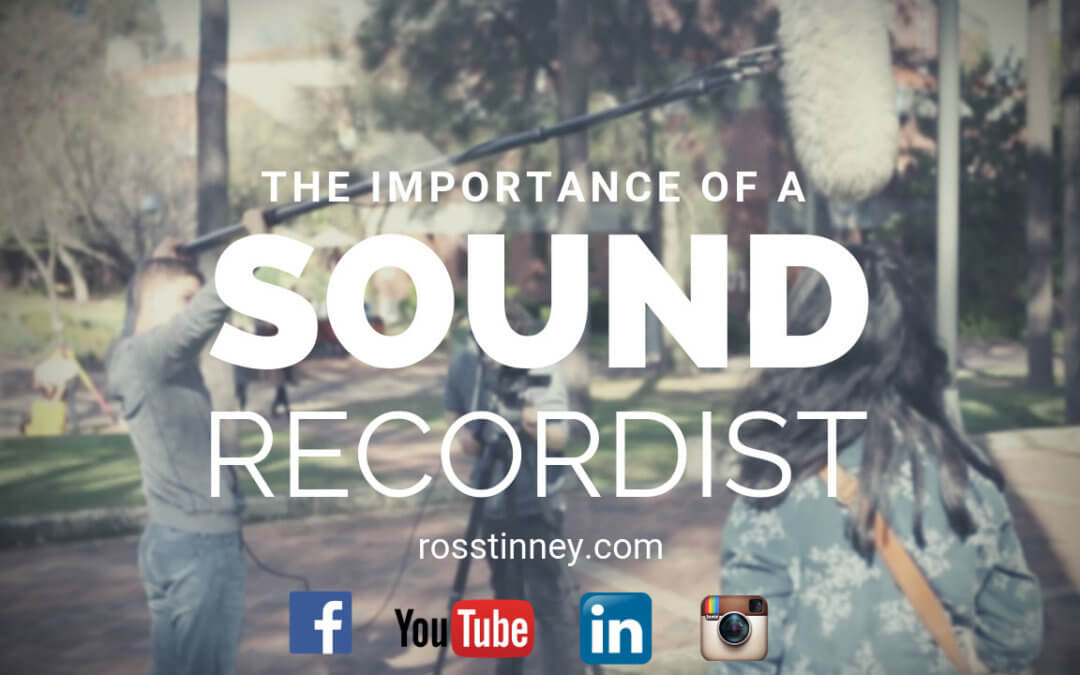 (7 min read – 1756 words) I was on a shoot the other day, directing a TVC with a presenter as the main talent. We had a full crew, shooting on an Arri Alexa Mini and pretty much all shots were on the highly intricate Ronin rig (more on my gear here). All was going well. We were into our second set up, when the sound recordist stopped everything.

He’d encountered a glitch with his radio mic. He checked the usual; swapped out the cables, checked the connections to the mic, the signals to the receivers, the batteries. Still nothing. Without hesitating, he ditched the radio mic, connected his boom mic, swung his pole in and was ready to go in a flash. Total down time? Maybe 4 minutes.

Now that is the hallmark of a true professional sound recordist. That is why I request this guy first on every shoot. There are other reasons; he is a true team player, happy to help lug camera gear, assist with any other department in order to keep the production on schedule.

Because I can tell you I have hired many sound recordists over the years and there have been some who fell way short in my expectations.

Now I started the following para by dwelling on the negative soundo occurrences…. then changed it.

I want to be a positive influence moving forward, so I’ve reflected on the key actions that I applaud in a sound recordist. And these actions you could transfer to many other crew.

The actions of a professional sound recordist

Here are a few sound recordist actions I like:

1. Turning up on set early.

Love that from any crew member.

2. Having the right gear.

For example, sufficient batteries, appreciating they chew through a few. Scoping out the job before rocking up, then arriving with the correct gear. There are two presenters on camera at the same time, that sort of thing. Be prepared.

3. Understanding every minute detail of their gear.

I’ve worked with sound recordists who have the very best, state-of-the-art sound gear. But here’s the problem; they bought it the day before and are using your shoot as the testing ground. No thanks.

4. Double recording with more than one gear.

Situation 1. Talent clothing not ideal to attach a mic

There are countless times when the talent we are putting radio mics on have the worst possible clothing to attach mics to. They can be see-through, don’t have lapels for lapel mics, are silk and hence rustle and sound like the mic has been stuffed into a paper bag, or the mic has to be stuck directly to skin. In other words, there’s nowhere to hide.

The sound recordist is suddenly in a dilemma and they need to act fast. What does the pro do? He double records. Radio mic in the best possible location, then a boom pole as a back up.

And that is exactly what I do in every interview I conduct. I not only shoot all interviews with two cameras; one wide, one tight…I also have a radio mic and a boom pole, just in case. Why? I’m stating the bleeding obvious here but I have come unstuck enough times to learn that you can find ways round shots that aren’t quite right; slightly out of focus or badly framed.

But you have absolutely nowhere to go if can’t hear the person you have just interviewed.

Beads of sweat will run down the neck of the sound recordist who receives a call from the editor asking where the sound is on an interview. Not pretty.

Sound recordists are confronted on countless sets with background noise that plays havoc in his headphones. They could be outside in a howling gale. The sound he is recording is sub-standard. Not their fault. They didn’t pick the location.

Here’s what sound recordist Glen Dillon says about a challenging recording on the set of a feature film:

I worked on “Drift,” a surf movie set in the 70s. There was one big scene that was set in a timber-mill, and they wanted it all working in the background. So you’ve got massive big saws going, cutting wood, and there’s a two-hand where two people are talking to each other in a wide shot and in a tight shot, which is a standard format. The challenge was to get audio and be able to hear the audio, with these saws going.

Of course, there are these things called ADR (additional dialogue recording), where they put the actors in front of the screen and they do a voice over the top. Then they can place these over the top of the buzz saw. But the director wanted it all live. He didn’t want to get any ADR involved because it spoils the feel of the film. So that was one of our biggest challenges.

So we all get together and we go round. I put my hand up and say, “You’re killing me. How am I going to get the sound of a dialogue under the sound of a buzz saw?” And he said, “That’s your job.” So you have to think. In that situation, we put radio mics under the clothing, and we got a buzz track of the saws going without dialogue.

Remembering to record these sound elements on set is the first challenge. Since the director is generally so focused on moving to the next set-up, the sound recordist must be quite bold in standing up for what is needed. If it requires an atmos track (cool, hip speak for an atmospheric track of the location where you were just filming the dialogue scene), the entire crew will be required to shut the f**k up for 60 seconds while the sound recordist is taking it, who is now elevated to King Shit for the duration. Once done, life goes on, and the sound department is sadly relocated to the background once more.

Yet, when it comes to sound-sweetening during post-production, and you are scouring the soundman’s hard drives for that quaint, little background noise in order to highlight a scene, it is very comforting when it is all there, neatly listed in detailed production sound notes.

And so frustrating when it is not.

Sometimes, there are no sound effects recorded at all. Perhaps this is due to budget: maybe the shoot couldn’t afford a soundman, even. In those cases, it is up to the post-sound engineer and director to fudge, find, pretend or, as we did on numerous occasions, create your own.

I will never forget what happened after having shot a Masters Dairy Iced Coffee milk ad in Perth. Titled “Masters Reject,” this spot was a classic. It opened up on a cow munching on a sack of coffee beans in a barn.

This cow was essentially the coffee taster, presumably eating only the very best beans. And when they weren’t up to scratch, out they’d go!! The cow would proceed to spit out a sub-standard bean, the bean ricocheting around the barn. It bounced off of an old car door, flew through a cobweb, pinged off a horseshoe, upset a thermos flask, tipped over a dusty wind vane, and upset a couple of chooks before bouncing off an old tractor and rolling down a tin down-pipe into a bowl marked “rejects.”

We cut back to the cow nodding his or her approval with an accompanying “mmmm.” We cut to a pack shot. The voice over reads. “Masters coffee, for people with taste.”

All great so far.

As we had recreated the spat bean by shooting pellets from a BB gun around the barn, recording sound would have been a waste of time.

There, engineer Ric Curtin and I set up all of the props in front of the microphone, and recorded the necessary sounds in sync to the offline vision. Ric recorded as I dropped, threw, bounced, hmmmed, slammed, spat, and pinged various beans, stones, sweets, berries, little rocks, and other coffee bean sound-a-likes. It was one of the most satisfying, fun days of my career.

For the chooks, we fell back on a sound library.

Pooping chooks on a soundstage was too much of a mess to imagine.

Ok it was a while back!!

Back to present day.

8. Multitasking as an option.

I was out on a shoot in the West Australian wheat belt recently; Just me as director/shooter and a sound recordist. The sound recordist not only shared the driving, not only was my camera assistant, not only recorded sound but was the drone operator. He had realised an opportunity to multitask himself, went and bought a DJI Phantom 4, got his drone license and now enjoys an extra income.

Something for all to consider. When the budget is tight and the producer needs to make the most with it, multitasking may make a difference to pick you for the job over that guy who can only do one thing. But beware: one awesome sound recordist who gives peace of mind to the director is definitely more valuable than a mediocre multitasking one whose job will need to be amended later.

The sound recordist runs an extremely finite department on a film set. They must be acutely aware of every puff of wind, low flying crow or craft, or a soft, stifled, background sneeze. They are in control of a most critical element in a film production, so must be constantly on the ball – ready to halt the shoot, reset the scene and do it all again, all because a phone went off in someone’s pocket 50 metres away (that’s a carton of beer on most sets).

A pro, keen-listening, quick-thinking, fast-reacting sound recordist is worth their weight in gold.

But ain’t that the case with every crew member.