Outsourcing your video production: when and why to do it 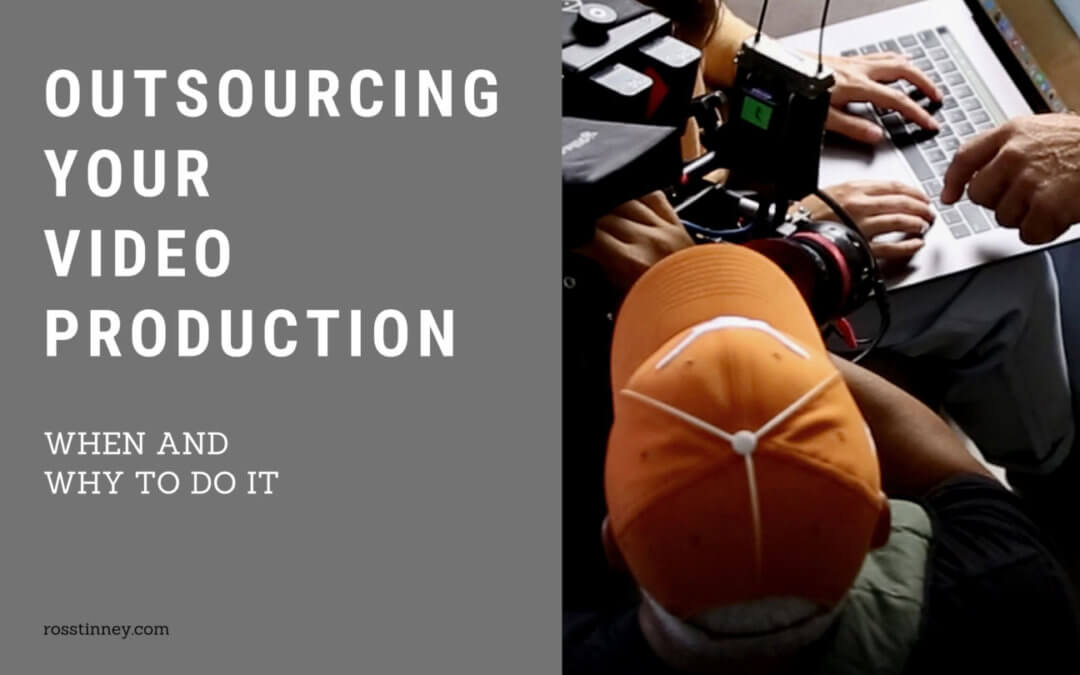 “I can do that! Yep, that’s easy, no problems! I’ve never done that before, but I can handle it. It’ll save money!!” If you work for yourself, are starting out in a small business, or are a freelance whatever, you’ve no doubt heard these comments. And on most occasions they’ve come from your own mouth.

It’s quite a natural reaction, when looking at a job – particularly a small to medium one, to first think how can you still maintain quality in the end product (the reason the client hired you in the first place-the quality of your work), yet keep a lid on the overheads. This then enables you to maximise your profits, keep the wheels turning, invest in new gear and grow your business.

So in order to achieve that, you make a decision to do more than one job; to not outsource that sound engineer, that graphic artist, make-up artist, that extra hand on set, whatever business you are in. Instead, you juggle those roles! Light that interview! Tote that gear! Get make-up on that talent! Mic that presenter!

You assume many roles of a film crew, all to make you more profitable.

Being a Jack of all trades

Let’s be quite clear, that’s not a bad decision; to be that worldly dude who can do it all.

I turned into one of those dudes.

I was 34 years a commercials and corporate documentary director. That’s all I did. I started a company and hired lots of people and grew a production business, representing lots of directors, both here in Australia and Indonesia.

When I returned to Australia, I was still just a director. No producer to team up with. Just me. And the world had changed, I was older and I didn’t have the industry contacts I once had.

Ten years away from a market, any market, will do that.

I was being left behind, I needed to adapt.

I didn’t want to start a new business and hire staff as everyone at that time were downsizing, so I started fine-tuning the art of producing, of computer editing. Then I learnt to shoot stuff, light stuff, then how to record sound. Why? Because, while I needed to re-invent myself, whatever I was re-inventing needed to be cost effective, until I got some momentum…and clients. Most crucially, to not have invoices from freelancers and subcontractors arriving in the mail every day was a damn good start.

Recognising the need for outsourcing

BUT….you are walking an extremely fine line between success and failure and recognising it is vital. Because trying to do everything comes with some serious consequences.

Being all things to all people creates a very ‘time poor’ you. You don’t quite get the time you need to do the best job on a shoot. Why? because you are shooting… directing… soundo… lighting. No make-up? Doesn’t matter!! What happens next? One vital element is compromised…and that is the quality of your work. You lose focus on the little things and the client is suddenly critical about everything and the chances of getting that next job suddenly reduces considerably.

2. You have over promised and under-delivered

So now, not only can’t you deliver the quality you promised on the job you are working on, but the ones you are finishing off and the other jobs coming over the horizon are also compromised. You don’t have the time do dedicate to fine tune an edit, write a professional proposal, a directors treatment, power point presentation, or have the time to go do a reccy, all those things that set you apart from your competition.

Over the years there have been numerous occasions where I looked at a job and realised I needed to outsource. Then realised after that I had made mistakes: I outsourced to the wrong person, bought gear that I didn’t do enough research on, OR the one that really frustrated me, outsourcing when the client’s budget couldn’t afford it. Boy, did I learn the hard way!

Deciding for outsourcing: what to consider

Fast forward to last week. My producer and I, Troy (I now have a Producer – more on Troy in another post)…Troy and I were putting the finishing touches to a video for a new client. The video was to play to 800 guests at a gala function, where all of the stakeholders on this project were to be present, including every person who appeared in the film.

Up to this point, I had been shooter, soundo, lighting dude and editor, while Troy produced, was interviewer and assistant gear wrangler. The budget was tight, we kept the job in-house and worked as a small, nimble team.

2. Value the quality of your work first

Now the sound mix on the final edit I had always done, with great results. But the sound on this film was different. This video was going be broadcast on massive screens, with the sound pumping through huge speakers, with multiple channels of interviews captured at contrasting locations, sound effects and music, both recorded live and downloaded from an online library.

Here’s the thing. I felt I had reached a tipping point, a point where I was outside my comfort zone and about to compromise the entire project by me doing the sound mix.

The time of me being Jack of all trades had come to pass.

We decided to get a professional sound engineer to tweak and mix it correctly. He said it was potentially going to be a $2,500 tweak of an 8 minute film, unless I could deliver it all prepared – everything set out neatly in separate tracks, to make his mixing job easy.

We had nowhere near that in the budget, but it had to be done.

3. Be prepared – do your homework

A month earlier, I had foreseen this challenge looming over the horizon and Googled ‘How to export XML files (the audio file) out of Final Cut Pro (the editing platform I was using) into Pro Tools’ (the editing platform the sound engineer JB was using). Basically, to find software that could create an audio file that he could quickly mix in a couple of hours and send back to me. I found what I thought was the right software and purchased it for $100 (X2Pro Audio Covert).

Well, here’s what Justin said about the sound file I sent him. ‘Ross, you made my life so simple on this one. Everything was where it should’ve been. Thank you so much!!’ It cost us $500.

Cut to the event. Clients and stakeholders bathed in the video, hearing a beautifully balanced soundtrack and following that night, proceeded to offer us a string of new projects. No, the sound mix wasn’t pivotal but there were no areas where the client could find fault. Troy and I were so pleased we had delivered a thoroughly professional result. Thanks to the right outsourcing and our preparation to it (one of the 5 personal values you must display in order to succeed in life)

We’re still quoting the other projects (I want to get stuck into quoting in an upcoming post).

Identify when you need to invest in a project and outsource,  hire extra people or buy tech stuff, in order to maintain the quality of a project, protect your integrity as a professional in the eyes of your client and ensure the cash flow keeps coming.

Because at the end of the day, a happy client and cash flow are king!!

Thanks for taking the time to read this.

Work hard and be nice to people.