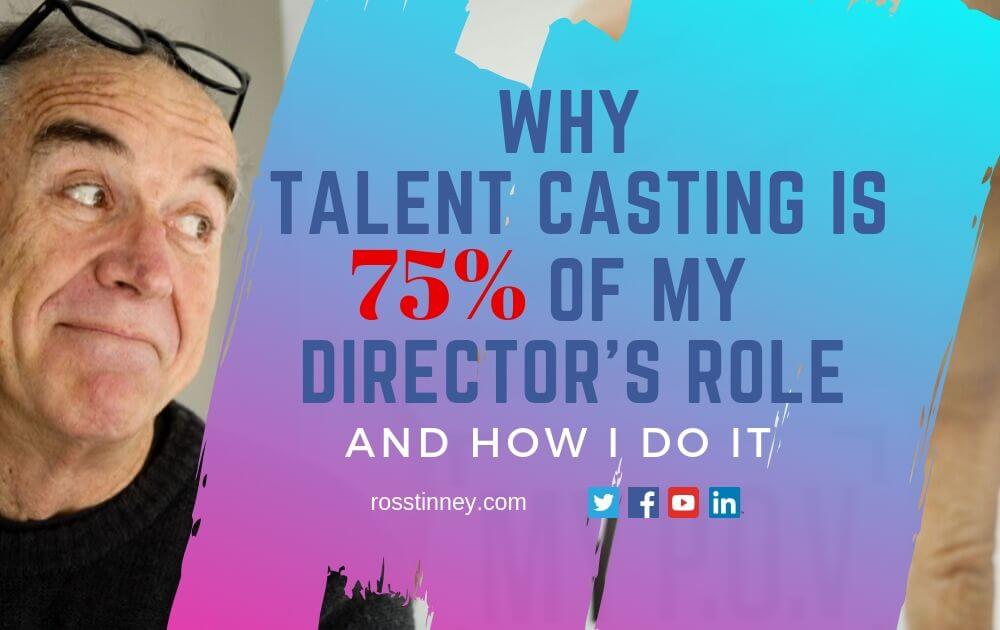 TVC Director Simon McQuoid goes further; he reckons it is 90%. Here’s what Simon says on the matter.

Obviously, it depends on what you’re making. But if I’ve cast the role well and the actors are good, then my job is super easy on set. You do it in the room when you’re casting the people. You’ve got to be really hard on yourself and hard on the people and make sure you get people who are going to step up to the plate. So, yeah, I would say it’s probably 90%.

Because when you get on set and they’re delivering their performance and everyone thinks you’re a rock star and you’re not doing anything other than being able to choose someone. And when you’re there, “Oh, you get these great performances out of people.”

I’m not getting a performance out of them. It’s just there’s some part of myself, the way I see people and I can pick people most of the time. Not all the time. Sometimes I get it wildly wrong.

Why is talent casting so important?

So, this is what happens when the talent performs at or beyond expectations:

You have a happy director:

Because their vision comes to life so much more quickly and it is closer to what they envisaged, theoretically. Consequently, they look good in the eyes of the viewing public, based on how they drew this lovely performance out of the cast.

You will have a happy producer:

And it keeps going…

You will have a happy ad agency and a happy client:

Because their product is being seen in the best light, it looks more premium. In other words, it stands out, so the viewer is more likely to go out and buy the product, hence putting money in the bank.

You will have a happy crew:

Because they will get home to their wife, family, or significant others, so much sooner. Forget the desire for a crew to accumulate overtime; just think that the crew, like everyone involved, seeks a smooth-flowing schedule that isn’t frustrated by talent who don’t learn their lines, or who are testy and extremely difficult to manage. The crew also wants to finish at a reasonable hour.

How do the talent find their way onto the casting list?

So, once the talent has been selected for casting, the scripts are sent out to all, and the casting session date is set after allowing for plenty of time for everyone to learn their lines. You have also briefed the casting agents on the style of delivery that you want, and may even have sent them a reference video.

What to look for when casting talent

1.The talent MUST have learnt their lines

Why is it, you wonder, that supposedly seasoned actors turn up to casting, not having learned their lines, or with absolutely no idea about the role they are casting for, or with some pathetic excuse?

It is just astounding. But sadly, it does happen, and they wonder why they don’t get the gig. Some turn up and say, “Listen, I’ve been a bit busy. Do you have an autocue or a teleprompter? Or would you mind if I read it off my iPhone?”

To win a professional role, you have to act like a professional (more on the role of an actor here). He who learns the script, wins. Why? An actor who knows his lines is confident and when you are confident, you are flexible. Confidence and flexibility mean that, if you the director wants to subtly change the delivery from the talent, you can, knowing that they will deliver with the same high performance.

2.The talent exceeds in the details

I love it when a potential actor has read the script, studied and understood the character, and comes dressed “in character” (when possible and applicable, of course).This then brings the character into sharper focus for all who view the casting tape, and hence gives the artist a head-start on the rest of the field.

Learning the relationship between the character they are auditioning for and other characters can also greatly impact on subtleties in the performance that are not necessarily on the script.

3. The talent can relate well with other cast and crew

But as much as the actor’s ability to deliver a line, to evoke an eerie reaction in a conversation, or to just look good is vital, the director must also consider how well they will blend with the rest of the cast and crew.

A volatile, pill-popping star who has a short temper, is arrogant, or who learns their lines inconsistently, is a liability on set, no matter how good an actor. You will get a good feeling about them in the casting, so it’s crucial you put them through their paces.

Get a snippet of every part of the character you are casting, not just the opening or easiest lines.

When I have had scripts with multiple dialogue scenes, with more than one talent, I have endeavored to cast the roles in various talent combinations, to see how they work beside different personalities. This can help you get a sense for their confidence, flexibility, and subtlety in expressing themselves, their spontaneity and ability to improvise. You tend not to get the same performance when you are feeding them lines yourself, or they are pretending to be talking to someone.

After talent casting is over: organise a rehearsal before shooting

So, once you have selected your talent—that is, the client, agency, stakeholders all agree that this is the line-up to make your movie rock—you need to bring in the appropriate heads of departments: hair & make-up, costume and wardrobe, scriptwriter, 1st AD. And you will set out a talent rehearsal/workshopping schedule, as it is vital for actors to be working with one another to build confidence and familiarity quickly.

It is also a chance to confirm how the dialogue is working. Does it need to be changed? Do the rehearsals bring about a slight character shift? Can the words be said more simply? All these decisions will have an impact for the writer, so it’s vital that the person who wrote the words is on hand to approve the changes before clearing them with the rest of the stakeholders.

It’s also important that the talent is rehearsing with the appropriate props, to understand their relevance and impact to a scene.