Lighting for video production and the Gaffer – DoP relationship 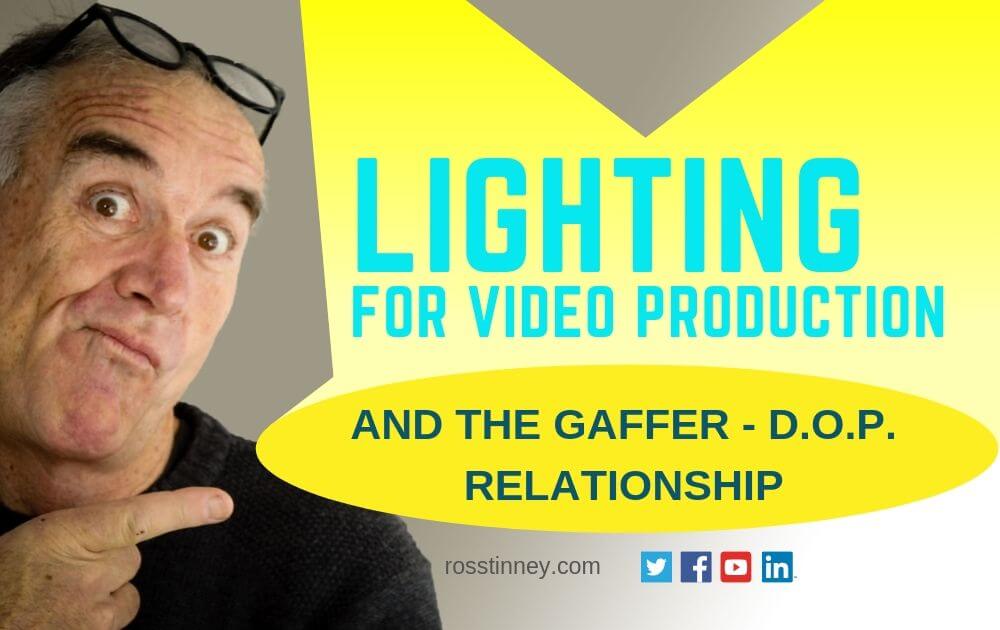 Here are some insights on lighting and the work between the 2 main film crew members in this area: the DoP and the gaffer.

That’s enough obvious insights. I have worked with so many gaffers over the years: wonderful, professional, skilled artisans with an easy-going attitude and relentless work ethic. The gaffer and his dedicated team never cease to amaze me with their commitment and passion for their craft.

But it is, without doubt, their relationship with the DoP that fascinates me. It is a crucial bond that carries the mood of the shoot, hence the DoP’s propensity to generally hire the same or a choice of their two favourites every time.

In Indonesia where the shoots are big, the crew is huge, and the labour cost is small, the gaffer can surround himself with a cast of thousands … OK, hundreds … alright, lots…. of assistants, all with the same never-say-die (OK, we’ve had a couple of electrocutions on set) attitude. This means things get done quicker. Not always the right things, but it also means that you can change the wrong things to right very quickly, too.

This gives the gaffer oodles of time to listen. To hear what the DoP and director have planned, to read the shooting board and review the monitor, so as to understand the framing. No point lighting the wide shot when you’re on a close-up.

I really enjoy, during the tech reccy, blocking the shots and discussing the requirements with the DoP, and then listening intently as he passes on those instructions to the gaffer. He gets it the first time. And is always ready for some suggestions on specific lights, or scrims, or reflectors… It really does work.

In stills, I use quite a lot of natural light, and I modify that natural light. Since I started DOP’ing, because there’s a gaffer and a great big truck with lots of lights, I’ll light a situation, but I will not abandon the natural process that happens in light.

There are cases where often there is natural light coming in, but it never really works in a practical sense because the sun is always moving. But if you can still capture that essence with a big truck of lights, that’s great. You’ve got that light consistently over an hour for the performance. But I tend to light so that it looks natural. The bigger the lights I bring out, the better I feel. I like big 18k lights that are soft, so you get this beautiful daylight.

People say, “That’s expensive, why don’t you just use the daylight?” Because the daylight doesn’t stop. The sun keeps moving and you can always daylight where the sun doesn’t go. My feel is to replicate daylight or enhance daylight, but to use lighting. I like that feel, and even if it’s dark and moody, I’ll always light above like it’s a fluorescent light. All these kinds of things with nice keno’s, nice soft lights, I tend to light very softly, that’s the way I like it. It’s more pleasing to the eye, it’s more my darker side.

I like dark light. It’s probably about where I am from, the dark country. It’s interesting, it’s intriguing. You are looking for the subject. But, unfortunately, advertising wants to have things a lot brighter.

I work up in Asia a lot, and they want it even brighter. They don’t like shadows but as long as I can keep a nice, natural feel.

I’ve just done a job in Asia, a guy in a condo doing yoga, and I had three to four lights to make it look like it was a nice, bright, sunny day with nice soft light. When you walked into the place, it looked nice, but when you put the camera on, it looked too flat.

So you end up putting quite a few lights to make it look real. It’s really interesting: the more you get into light, the more intriguing it becomes and harder it becomes because you’ve got to make a lot of decisions.

Quick communication between DoP and Gaffer is essential

When you are doing TV commercials, you don’t have time to make a lot of decisions. You’ve got to go in with a plan. And stick to the plan. You’ve got to have it in your head, what it’s supposed to look like, and then you communicate to the gaffer. But you’ve picked the gaffer, so you know the gaffer and you are on the same wave length.

It’s all these wavelengths. If I get a different gaffer and he doesn’t understand what I want, then it can end up really quite bad. So it comes down to all of these relationships, communication. This is vital. This is very, very important, especially to a student, that you can communicate what you are trying to do. If you can’t communicate to the crews, and there is a lot of money on these sets, you are wasting time. You’re not getting your point through.

So that’s why you tend to use the same gaffer. You use the same grip, and that’s why directors use the same DoP or that’s why they’ll have a stable of one or two that they like to use. It’s because they know they are not wasting their time, re-educating, trying to get your point of view through. You can speak to your gaffer, and he just gets it. It’s almost like telepathy, it’s quite scary.

It’s also worth noting how lenses are the key element that determines myriad actions that follow. The speed and size of a lens dictate the amount of light coming into the camera sensors; how wide the spread of the shot impacts on how far out of shot the lights are positioned, and that the furthest-out-of-focus, distant wall stills needs some texture, hence attention from the lighting department.

And that’s all when the camera is stationary. Tracking, craning, zooming, introduces a totally new set of challenges; lighting that goes from fully blown to moody all in the same shot. What’s more, it exposes a number of extraneous elements, like light stands, barn doors, large scrims and idle crew, all creeping into the edge of frame as the camera exposes different parts of the set.

So, there is a strong code of conduct that pervades these passionate technicians: to be constantly on standby, or, as I have said before, in a constant state of being prepared. One run through on a shot can trigger a list of lighting tweaks that need urgent attention.
Time is money.

Just on that, I have had the pleasure of working with a wonderful DoP, Keong.

I shot an Attack washing detergent commercial in Malaysia a while back with Simon Lee at Pegasus Films.
Keong knew his craft, that is without question. So much so, that he would light most of the scenes with just one light. At first, I was a little taken aback, until I saw the result on the monitor and the subsequent vision in the commercial. It was stunning. Suffice to say, the shoot happened quickly and efficiently.

Keong is today one of the most sought-after DoP’s in Asia.
Time is money. He saves you heaps and is a valuable asset on a set. Fewer lights to hire, fewer gaffers assistants, electrics to hire, less overtime.
Everyone happy, lah.