How to build and present a great showreel 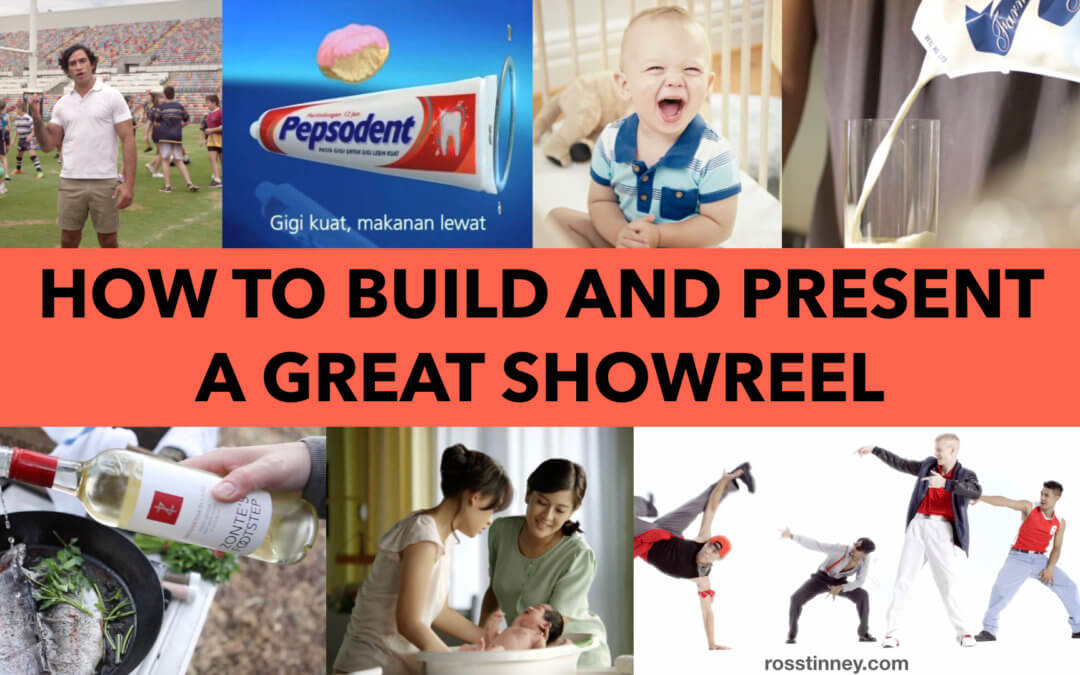 (2077 words –  6 min read ) I received a call from two young creative brothers who were passionate about the film craft and wanted to make commercials. They had started up a production company and wanted some advice on their showreel.
You see, they wanted to get into the advertising agencies, and wanted to be sure that the reel they were presenting was hitting their target market.

The vision they had on the showreel was really tidy, and very professionally done… but it included no commercials, only parts of short films that they had worked on and were all set in a video montage-style of presentation, with a wacky soundtrack. Agency creatives nowadays don’t take kindly to that style of presentation. Anyone can make OK images look cool with some deft editing and zany music attached, but does that sort of reel show off your skills as a director/producer/editor to your best advantage? Probably not.

My advice to these lads was to find a unique selling proposition, a style of presentation that stood out from their competitors. I suggested that they go and make their own commercial. Create their own product, or grab one off the shelf in the supermarket, change its name, write a script, storyboard it, shoot it, edit it, sound-sweeten it, and then get a mate to create a track for it, using Garage Band, or the like.

You see, your reel is your calling card, a collection of your best work. It is generally two to three minutes of quality, edited material, back to back.

What’s on the reel?

“I don’t have anything…”

OK, now, what movies do you love?

So, you need to create some work in order to create the showreel, which will become the core of your face-to-face presentation.

If you are going to show a short film, then show the whole thing. But check to see if the people you are presenting to will have time. Otherwise, grab all the creatives’ emails, and then send them a link to your short or any of your long-form work. Don’t get me wrong…creatives are constantly looking for their next, budding, upend coming director/producer duo. You just need to be respectful of others time. Make a short, sharp face-to-face presentation. Make your mark with a tidy, snappy 2-4 minute presentation.

If you need some tips on how to create engaging video, check my post on Corporate video elements.

What some experts say:

Producer Sue Taylor offers some advice to those wanting to improve their skill set and their showreel:

Keep making stuff. It is that sense of keep practicing, keep doing stuff. I don’t think there’s any excuse not to, in today’s world. I think, years ago, if you wanted to make something on film, it was an expensive exercise; you did need money and resources to do it but now you can shoot something on a mobile phone.

Creative Director Andrew Tinning comes from the other side of the fence, explaining what qualities he looks for when hiring freelance people:

I asked Andrew if he wanted to see the commercial you are about to create on the director’s reel that you’re considering?

Absolutely. But the reality is, not everything is an award-winner, and at the end of the day, that’s not your primary objective. We are a service within a marketing industry, and some things have to be done really well, but they might not end up on someone’s reel because it might be a standard piece of retail work.

Obviously you want the people to take as much pride in their work as you do and you also know when you’ve got a great idea, not just for the client but an award-winning idea and you want your supplier to see that and do their utmost to make it a reality.

Another option to get your showreel expanding is to volunteer on someone else’s project. This can help you build up credits. Credits are good.

Also try and establish some clears goals and a schedule for perhaps a year.

You need to have a plan of attack.

Know what kind of film you want to put in your showreel.

Some will say, put short films in their entirety on your reel.

That really depends on who you are targeting. If you are making a presentation to a funding committee for a short film, for example, then, sure.

You should make up your reel, accordingly. As I said earlier, understand your audience first before boring the pants off them.

Whatever reel you create, it must be slick.

I think what it boils down to is, does that person have a distinct voice? Because really what you are doing is you’re making a product that is an extension of you and it’s not really about anything other than that.

So as long as your voice and what you believe in and your taste level, your tone and approach and the feeling you’re feeling in here, is manifesting on the screen, whether it’s shot on an iPhone, whether it’s one shot, that doesn’t really matter. It’s getting your distinct voice across. That’s actually what makes what we do really lovely because it’s very subjective and I love that.

So just work on that. Work on and analyse how you manifest your voice on screen.

And also understand, the hardest reel is your first.

If you have built up a genre of action films, or if you lean towards a storytelling-type style of direction, then make sure that your best examples of that genre are at the forefront of your showreel.

I recall, when I left Channel 7 in Perth as a Program Director and started my own production company, all I had on my reel was Channel 7 station promotions, and a large furry Fat Cat running around a children’s set!

It was a real struggle. BUT, something in my favour was that two of the TV station promos had won awards at the New York Film Festival, so that made them stand out, which kept my viewers keen. And my persistence and perseverance eventually paid off. The first big job that I won as a commercials director was to direct the station ID’s for local TV station Channel 9!! Why? … A great example of a similar campaign for Channel 7 was on my reel.
BINGO!!!!!

Once you have locked in on your film genre, go market yourself.

This is the hardest part. There is a great deal of negativity and ambivalence out there, when you first set foot in the market. It can be quite soul-destroying, but please, keep the faith.

If you are opening up your own production company with a producer mate, then ad agencies are what you’re aiming for. But if you are merely starting out as a freelance director, you might not look at visiting ad agencies straight up… Instead, it will be the production companies that you are seeking, initially. The thing about established production companies is they already have an inside running; they know the right people. They can be your key to opening the door to work.

You need a producer.

Because what you are looking for is a film producer, a partner.

Without a producer, you are nothing.

Even if you decide to hit the agencies directly, they will ask you if you have a producer. So find a producer—preferably a friend or associate with great people skills… like yourself. Oh and make sure they are good with money and can organise stuff.

Now, if commercials are not your passion and short films are what you want to pursue, that’s fine, too. But you still need a producer, and what you want to do is to pay the bills while expanding your knowledge, so commercials, company profiles, safety/training films…any online content are a wonderful way of finding your feet, and getting production time under your belt. Producers can work on the quotes, plus make the appointments to see people, be it an ad agency or film funding body.

So, do it all. It’s all about constantly making stuff.

The ad agencies will already have their favourite production companies, but are always on the look-out for the next Michel Gondry who can provide an edge for their clients.

Make sure your showreel is short and highlighting your best work. Not your grandmother’s birthday video but relevant, edgy examples of what you are capable of doing. And for goodness sakes, make sure that the format you bring works on their system.

Have your reel in all possible formats to avoid surprises at the presentation.

Just because the agency is huge and the building looks really high-tech, doesn’t mean their AV set-up is similar. Remember, these people are creative, not computer programmers. They generally know nothing about the audio visual system in the boardroom. So take your laptop just in case. I’ve presented many a reel on it.

Ensure all work you show is of the highest quality, technically as well as creatively. What looks fine on a small laptop may fall apart and look totally amateur hour on a massive 60-inch LCD monitor, or front projection screen in the agency boardroom.

Most importantly, always have your business cards with you, or the ability to ‘air drop’ it during the meeting. Always have your reel at the ready, either on your phone, an iPad, or thumb drive, hard drive, or be ready to fire them a link to the reel on your Dropbox or personal website.

Reality check: being a freelancer.

If you are on the outside looking in; in other words a solo individual with a creative skill looking at scoring work on a contract basis with a production house or ad agency, you will invariably be labeled a freelancer.

This is not a bad label. I have been a freelance director for many years. Most of the film crew I hire on my productions are freelance people; make-up artists, writers, gaffers, grips, sound recordists- all have acquired their own gear over time and charge themselves and their gear out at competitive daily rates.

They make a solid living working on a job-by-job basis. The challenge is the income is never regular. You are at the whim of the market, you are relying on individuals within production houses and ad agencies to first like you, then like your work, your attitude, then to be regularly supporting you.

And trust me, your competitors will be in their ear, in their face, in their space as well, so regular communication is key. You need to keep in touch with the decision makers and most importantly, keep them in touch with your recent work.

Remember: out of sight, out of mind.

Out of mind, out of job.