Becoming a film director: how to start your journey 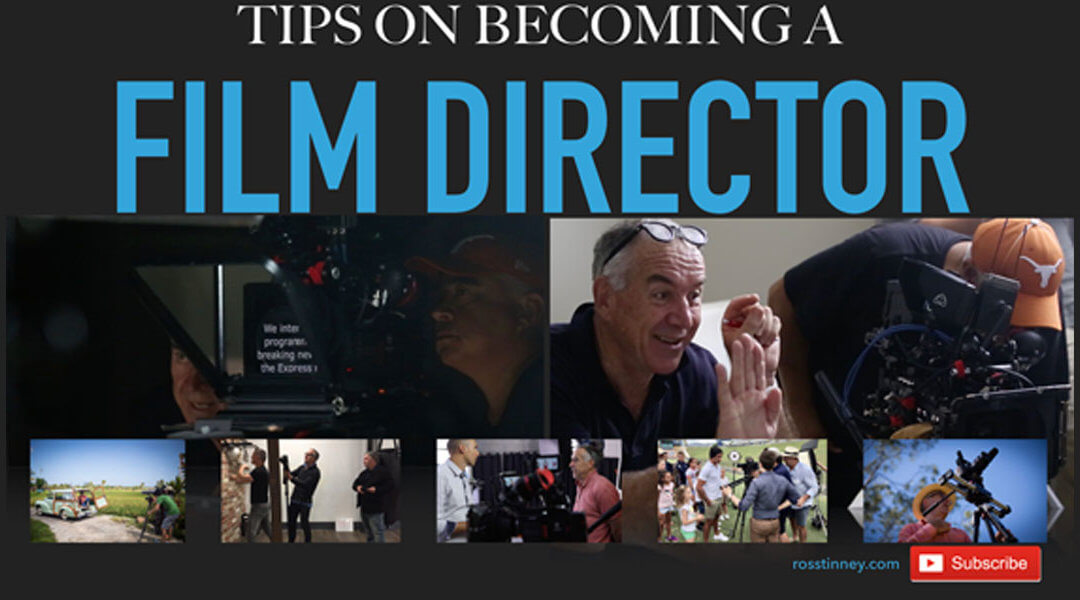 (1166 words – 4 min read) So, you want to become a film director. But where do you start with this thing called passion?
You may well have already started, whether at film school, University, TAFE, or in your last year at high school…
The best way is to start at the bottom of the ladder and climb up, learning everything as you go, talk to everyone.  But even before that, the passion needs to be in full swing…

You need to be watching movies. LOTS of them.

And watch the same movie over and over, looking for mistakes in each film that you watch: acting errors, editing errors, continuity errors.

If you want to become a film director, learn about acting.

Acting is also a good way to understand how to direct talent… that is, by acting yourself. So get into an acting class. It’s all about learning every aspect of the industry.

Simon McQuoid, formerly an Art Director and now a TV Commercials and film director (recently appointed for the upcoming Mortal Kombat, to be shot in Adelaide, Australia), based in Perth but directing mainly on the East Coast of Australia and the US, has similar advice:

Just make things. Make terrible things. Just keep shooting stuff and making stuff. And you can do that now, easier even than a couple of years ago.
Directing and dealing with people is so much about human interaction and human nature, and how we all think as animals, right?
You say to someone, “I’m a director.” “You are? Ok.” They believe you. Now, what you need to do is back that up with, “And here’s what I’ve done.” So just start making things. Whatever it is, it doesn’t really matter. The more you make, the more mistakes you’ll make, the better you’ll get.
And you’ll make lots of mistakes. I make mistakes on every job. You push things around, try different things. “Oh, that didn’t work.” But there’s no other way to do it.
And then you can say, “I’m a director and this is me.” But until you’ve got that, it’s theory, and you need to make it a reality.

Theory to reality, that’s the key.

It’s learning the fundamentals first, combining it with the theory, and then working out which direction you want to go. Film director, producer, DoP( Director of Photography), writer, art direction. So much choice (check my list with 30 production roles if you want more ideas of what direction to take). You may feel yourself ready with an idea to get funding from your local film body, then going and shooting it.
James Cameron once said, “Pick up a camera. Shoot something. No matter how small, no matter how cheesy, no matter whether your friends or your sister star in it. Put your name on it as director. Now you’re a director. Everything after that, you’re just negotiating your budget and your fee.”

Simon McQuoid: “the idea is at the core”

To Simon, the idea is the most important element in any stage of the  process. He explains that in his transition from art director to commercials director:

The common thing between being an art director and being a director, especially in advertising but I think also in many facets of filmmaking, is that the idea is at the core of what you are talking about, whether it be a 60-second spot, or whether it be a short film, a feature. Whatever it is…that’s what’s really important.
As an art director, that was precious. I was obsessed about it. I crafted it and made it, and there can be many different ways of executing that idea. But until the idea is rock solid, really clear and smart, you really don’t have anything.
Now that I’m a director, when I get a script I look for what the idea is, still with that discipline of being an agency world for so long stays with me, so that’s the common thing but what’s different is that now I’m all about the execution of that idea.
I used to execute it in my mind when I wrote stuff before but now I actually have to bring it to life. Now I have to make it and I think that’s the most satisfying part.

After shooting a movie you are happy with, enter it into film festivals.

And one more thing to help you on your way of becoming a film director?

You need to work in as many fronts as possible. It may take a while before you get your movie into a film festival to be discovered and become a celebrated film director.

Become a film industry person: approach production companies, start working and learn as much as you can from all aspects of production

A production company is more likely to look upon an individual with solid time as a runner or PA (production assistant) than a student choked to the eyeballs in theory.
So, get off your butt, get out the door, and get into people’s faces. Get your toe in the door of a production company, then gently squeeze your foot in, preferably while still holding the door ajar with aforementioned toe, then prise your main frame through. Take a breather, check for no bruises or broken bones, and then use your innocent, self-deprecating charm and passion to force a freebie job out of them: as a production assistant, lighting technician, art director, or even assistant-to-the-assistant, props cleaner, toilet flusher… anything.
Now, if they have a small budget in there for you, treat that as a bonus. Then you can start to make a bit of money while learning the ins and outs of the film process studying who does what, what goes where, how and why. Be on standby to do the jobs others neglect, ignore or don’t want.
Be hungry.

Be humble: see everything as an opportunity

You may start off as a gofer: go-for-this, go-for-that, a mail boy, a shit-kicker. Then, you become part of the furniture. You get on the radar, and then, suddenly one day, a production assistant is sick, and the EP—that’s Executive Producer—grabs little Johnny or Joline, and gets them to fill the gap on a production. And, voila! You’re on your way.
The point is: be humble and accept whatever comes. Remember: you’re already on your way up to become a film director.