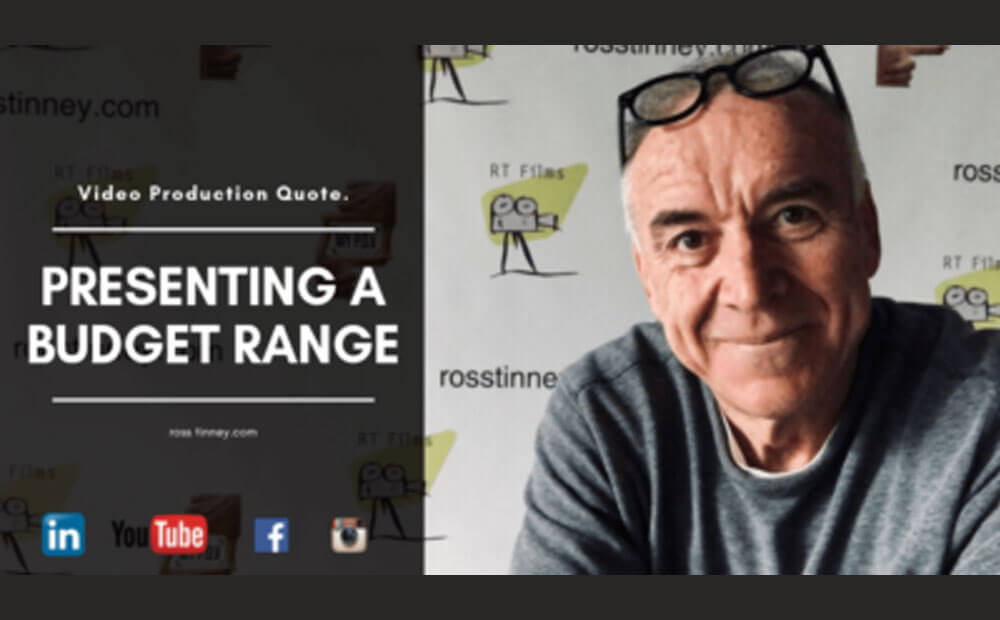 (1299 words – 6 min read) This is Part 2 of my post “Quoting and approving a budget for a video production or TVC”.  Have you ever been in this situation: you’re briefed on a video production quote, assured that you are allocated X amount of money. You go, do your homework, present a beautiful, perfect quote, ticking all the boxes and more. Days, perhaps weeks of work, thinking, planning, talking to suppliers and crew; only to find out the project ended up in a drawer somewhere, because the budget was never approved. Perhaps it never existed in first place. Anyway, you were out of the budget range.

Now you can be the producer, the agency…or the marketing person. So how to maximise your chances of getting your video production quote approved and avoid the disappointment of seeing all your effort (and others’) going through the drain?

Answer: be the boy scout (or girl guide) and be prepared.

Concept x reality: when the brief does not match the budget

A while ago, my producer Troy and I pitched on a really cool project; a series of films for web release, with a back-end documentary that folded out of the films into a potential one hour documentary for free-to-air TV.

The quote presentation was slick, our creative on-point, the budget as tight as you could possibly make it.  Not resting on our laurels that we could pull this off on our own, we sought the skill set of a kick-arse doc director, conversant in live-to-air, plus his favourite editor. And we got positive feedback and advice from a TV Network to get the back-end ball rolling (Confirming the director and editor we had hired was a damn good start).

We were up against one other production company but felt with the quality of prior work we had done for this client and our overall experience in this sort of genre, we were mildly confident. Had we answered the brief?  Yes.

We pitched on a Friday. Two weeks later, after gently prodding the client for an answer, we received an email stating we had been unsuccessful.

Disappointed was an understatement.

We tried to find out why we had lost the gig.  Not an unreasonable request, you would think?

“We’ll get back to you”, was the answer. They never did.

Everyone inside the company had gone to ground.

Had we pissed someone off somewhere along the line?  Pass. Well….there are more twisted egos and sooky na na’s lurking in corporate land than you think. So maybe. Who knows!!!

The company in question is not a small company by the way, so one would think professional etiquette of responding with a reason, would be standard.

Where is this going, you may ask?

Later on, Troy decided to call our supposed inside ally one final time.

The answer? The job never went ahead.

Why? They never got the budget approved internally.

How do you overcome that eventuality?

You can’t. You hope like hell that the client contact is feeding you the right brief that was commensurate with the budget range they had been allocated, assuming they had a budget in the first place.

So here’s the first lesson in maximising your chances of getting a video production quote approved:

Make sure the brief and the budget given to you align before starting to prepare your video production quote.

And pay attention to this:

Don’t lock yourself into a final video production quote until the creative approach has been sorted.  Instead, present a budget range.

Nothing worse than making heaps of really nice corporate films that cost a bomb and going belly up doing it.

We are currently pitching on another really nice corporate project. We seem to get a lot of these. :-/

So the client has a vague idea of what she wants and has tabled classy looking corporate youtube films from around the globe, as an example of their vision. Classy graphics, tracking moving video that is beautifully lit and shot at the perfect time of day. Plus 2D and 3D animation, kick-arse music, expensive sounding voice. A lot of great corporate video elements, but no idea given on budget.

Hence, we have replied with a professional presentation, including examples of similar style corporate films we have produced…..and a range of dollars in the quote. A budget range. So we are covering ours and their options and arses.  Ultimately, until the writer locks in the creative and the client actually paying the bills writes Happy (or something similar) on the bottom of the quote, then that’s where we will sit.

Too much to lose.

Focus on approving the script

Because let me tell you this; 80% of any production of this nature is first working out what you want to say.

So that means the script is gold from day one, or as early as you can get one. That being; the script in one column AND what you are seeing, when those words are spoken, in the other column.

The script drives the budget.

The budget drives ‘what’ and ‘who’ you can afford.

That ‘what’ and ‘who’ you buy for the project drives the look and feel of the end product.

Know when to outsource: including the right skills and the right people in your budget range

Now you may look at your next project and say to yourself, ‘I want this to be a winner and as director/producer/videographer/decision-maker, I believe this job requires someone with a certain set of skills, skills I don’t have’.

Cool. Time to outsource. Go for it.

That could be a lighting DoP, a DoP with solid Ronin gimbal experience, a special film grader, a drone team that can go off and shoot their sunrise bits at the same time of day that I shoot the ground footage. It could be a range of new plug-ins, or music from a more expensive, better quality library.

Or it could be going that step further and hiring a more experienced presenter.  Looks more professional, client happy, learns their lines, less takes, producer happy, everyone goes home on time, crew happy.  Less takes to wade through in the edit, editor happy. Better result to look at. viewer happy. Client makes more money, you get the next gig. World goes round.

You get the picture.

Move your money into areas where it can be most effectively spent, with the most premium results.

And that involves something I constantly impress on everyone and that is Managing the client’s expectations from the outset.

“For this amount, you can have this result. However, if we adjust it here and swap this around, don’t use that, but hire this we can achieve this beautiful look without affecting the budget”.

Answer the brief, begin with the end in mind, exceed expectations.

Have a great video production quote presentation (click for more on approving the budget).