Steal-o-matics beware: from concept to reality 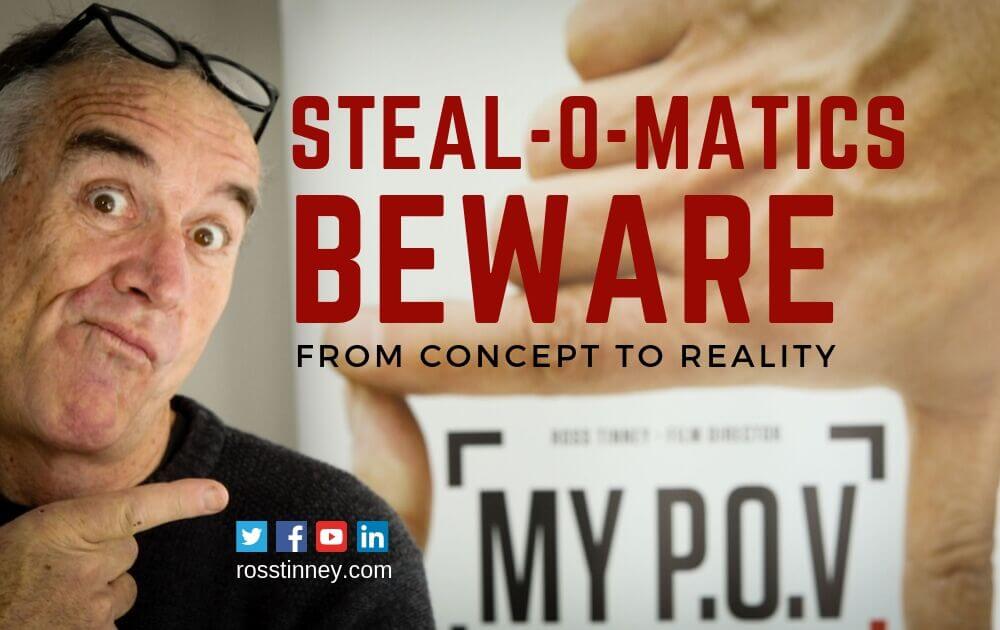 So, what is a steal-o-matic?

When an ad agency gets briefed from a client, they go away and come up with a range of concepts for the client to consider. And, in order to bring one of these concepts to life, an agency creative will sometimes edit up a montage of footage from a range of other global commercials, films, documentaries, and magazines that enhance the idea, and often cut to a music soundtrack that they feel is appropriate, no matter who recorded it.

I was pitching on a 60-second corporate commercial recently, and was sent a steal-o-matic from the agency to pitch on. No script, no storyboard, just a steal-o-matic. It contained footage from a variety of stock footage agencies, plus big budget US and European lifestyle commercials, edited to a recent multi-award winning soundtrack.

The locations, were stunning and varied, the talent was world class, the stunts, all in jaw-dropping slow motion, the lighting and camera moves well thought out. It looked like a million dollar campaign.

The problem was, the budget parameters that the ad agency had given us for this job were a fraction of what money the steal-o-matic makers clearly had at their disposal. As the saying goes, they had “champagne tastes on a beer budget.”

It is even more problematic when the music is particularly pivotal to the vision; when, without it, the pictures feel flat and uninteresting. To buy the rights to the track is generally not an option. To create something similar is the only course of action, but it never quite does the same job.

As for the vision in the steal-o-matic, it is crucial at this point to get in front of the agency in order to get a handle on the reality of the brief, since the budget on the project clearly did not match the expectation of the agency’s creative vision. This is a big trap for a production company to fall into.

An animatic, on the other hand, is achieved by taking the cartoons or sketches from the agency storyboard and adding them to voice over and music, in order to indicate the early structure of a commercial.

This is generally created so that the agency can research the idea in the market, usually via a research company. A cross section of the target market sits down in front of the ad and, after watching it several times, is asked relevant questions by the researchers. Such questions as:

Did you understand the story?

Did it have a positive or negative impact on you?

What similar product do you currently use?

Would you buy this product?

Do you remember the name of the product? (Not as silly as it seems—many viewers are drawn into an ad, think it’s awesome and impactful and inspiring, and yet have absolutely no idea of the product’s name.)

The animatic is a vital tool for getting a creative idea over the line. Here the director can take his shooting board and edit the drawn pictures to a guide voice-over, in order to get a feeling of the cut. Are there too many shots? Does it feel natural? Does it flow?

Another form is a video-matic, which uses photographic images rather than cartoons or sketches. Not as concise as the animatic, as the expressions of the photographs never quite match the intended expression of the talent in the final ad. It’s a compromise, but sometimes it’s better than nothing.

Yet another option is taking the video-matic to another level by filming talent acting out the shooting board. This can have either a positive or a negative impact. Positive, if the talent in the video-matic plays their role well and presents a close representation of the real thing; negative if the “actors” (they could be friends of the agency, or unpaid talent wanting to get a break) are woeful actors and present the product in a totally unflattering light.

The animatic is the best option.

Steal-o-matics have their place but my feeling is that, if a steal-o-matic is not managed well and an understanding is placed on its expectations, it can send everyone on a wild goose chase.