You Writer, Me Director: how to work with someone else’s script 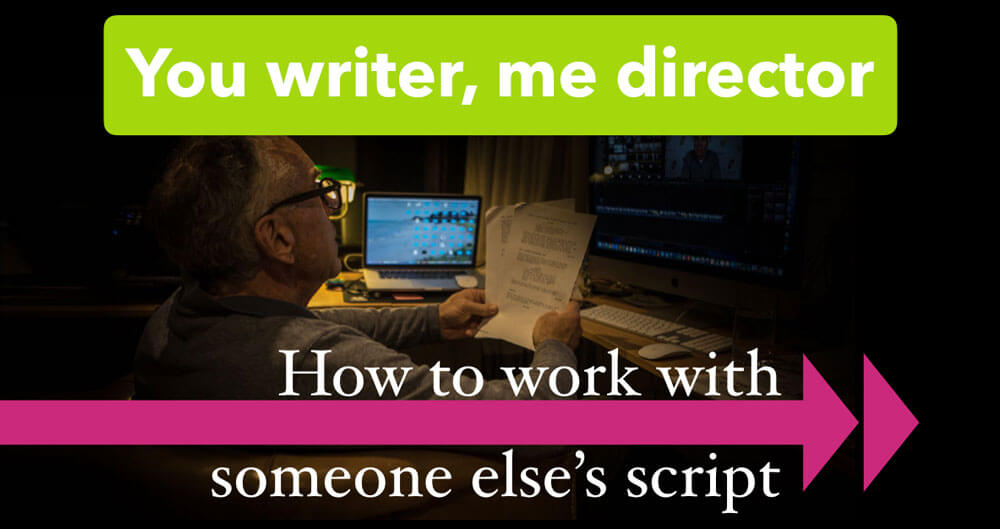 Whose script is this?

(1538 words – 6 min read) If you are a director like me, then you are working with a script. It may be your own script, one that you’ve written as a short film where the germ of the idea came from your childhood. Or you may be working with someone else’s script, an idea that someone else (a writer) has created themselves over many months, even years.

So your role is to bring the writer’s words to life. It may be a TV commercial script where you have a writer and art director as joint creators, or a pilot for a TV series from a TV producer, a short film or a corporate video. Whatever the format, you must embrace someone else’s ideas with respect.

So I have developed, over the years, a mantra. Well, I actually found this in a book on how to get on in life. But it’s stuck with me. And it is this:

(This goes along with other personal values I stand by. And it’s also a life skill that you should turn into a film skill).

Working with a TV commercial script

If you are attached to a production company, you will invariably receive a script/storyboard from an advertising agency on which to offer a quote. How come you got this? Well, remember your showreel? Well, they must have liked it. You have commercials on your reel that look like the style they seek, or you have a special effect that is kinda cool that attracts them to you, or perhaps you included a unique piece of talent direction that inspired them to call you. So, you have ticked a number of boxes even before you meet the creators.

What NOT to do:

Most importantly, what you don’t do is this: barge into your first meeting and say, out of the blue, “Ok, your idea (in other words, the approved client script) is fine, but I have another idea that I think is better.”

Are you for real!?

Ah, no.You see, I maintain that 80% of a film project, any film project, is first and foremost working out what you want to say. So a lot of time has gone into this project before you stuck your ego through the door.

So who are you pissing off, here?

You are pissing off not just the creative team who sweated for months getting this project over the line—you are pissing of not only the ad agency producer who has perhaps gone out on a limb to select you as the director, not only your own producer who is cringing at the change in direction in front of the agency, not only the agency account service team members who have guaranteed to the client that you are the right director for this particular storyboard, but you have got the client offside as well, who, all of a sudden, senses that your ego has gotten the better of you.

Remember what I just said?

Because you are now one person in a large, eclectic mix of big dollars and big dreams, not to forget the big egos. But not your ego. Remember, you left it at home. It’s now a team play from here on in.

So take the original idea and improve it, by all means. Enhance it … great. Make it stronger, yes … But do not break it in two, shove it under the carpet and start again. If you do, you will enjoy two jobs with this client in one day: your first and last.

For me, the script is the hard part. The shoot is the easy bit.

This part of the film has taken months, if not years, to be created painstakingly from a whimsical idea, a dream, an epiphany, something that spilt onto the page after someone had been out walking, or asleep dreaming. It’s gone through countless hands and heads, has been re-written, trashed, hashed, and chiseled into a form that finally approaches the screen. Where the client/the film studio/the one who pays the bills has agreed with the producers and writers and marketing gurus, that this little gem will fly, will hit the mark and make them money. Not win awards. That may happen, fine. But first it will make them money and the company shareholders will be happy.

So, changes are never going to come easy.

Many people are approving it

There have been many people hanging off the script. The client or movie house is happy that the product is being correctly presented to the market, assured that the target market will understand and embrace the film. It has more than likely been market-tested to ensure that the script will be well received, long before pre-production. The producer has had to budget it. The executive producer has gone out and funded it. Now, it is the director’s task to bring it to life. And the whole film crew is impacted by it.

Golden rule: lock the script before shooting it

It doesn’t matter whether we are talking about a movie script, a corporate voice-over, or a short film: the key is to lock the script. To get it approved by whoever has to approve it.

Why is this vital?

Let’s look at the simpler form: a 30 second commercial script layout, for a moment. Imagine that you have a script in an AV format, with visual description on the left and video on the right. So, when words are being spoken, you can read the corresponding imagery on the right. What happens when the correct words are not in place?

The emotion could be different, the expression may need to be changed to match the copy, the take-away for the viewer may be totally the opposite … or perhaps there are no words next to the visual at all. It’s just music. Even more pressure is on the director to capture the exact emotion at that moment. If the copy changes or the angle of the camera changes, if the size of the frame alters…

What happens is, confusion reigns.

The delivery by the talent is unclear, the message is unclear … there is a muddy air about the story.

Yes, things may change subtly during shooting, but to have to go back and re-shoot an entire scene because the dialogue wasn’t clear, well, that is not good for anyone. For one thing, the budget will be compromised, which in turn affects the producer’s happiness… and this affects everyone else, when the producer is not happy.

Lock down the script.

So how do you do that?

Talk to the writer

You go back to the source – the writer, or the client – and talk. Because what you have here are two people with different visions. The writer has had his or her vision since the outset, and generally it is firmly set in concrete surrounded by a thick layer of ego. And they have really had to take on the role of director in order to create the script, like “We open on a sun-drenched balcony of a house…” The story has been set out with dialogue and a shot description. This in turn is set out in an advertising agency storyboard for the client to view and approve. Then, in comes another passionate creative (the director) with a fresh take on the vision, and you suddenly have a clash of directions.

Is it a wide shot? A crane down shot? Is there sunshine? Is it sunset? Who is on the balcony? Why a balcony? The copy may be a little clumsy, the story may be more simply communicated without words in a certain section. It could be a look or a subtle reaction. So here, the director and writer and usually the art director (this is a commercial script) will toss ideas around, and go back and forth, ensuring that the original idea remains intact, the marketing strategy, take-out and call to action are not compromised for the viewer, and then the client sees a re-worked and more efficient concept. Yeehaa!! Everybody wins.

Make sure the producer has seen the latest version

But. And there is a big BUT … has the producer seen the re-worked script? Is it still within the budget you originally quoted? If so, before presenting the newly worked script  to the money folk – the client – the producer needs to double check that you have not suddenly introduced a crane when there was just a tripod, a location that is miles from all of the others, or that there is now a werewolf where there once were warriors.