6 tips for a good Director-Editor relationship 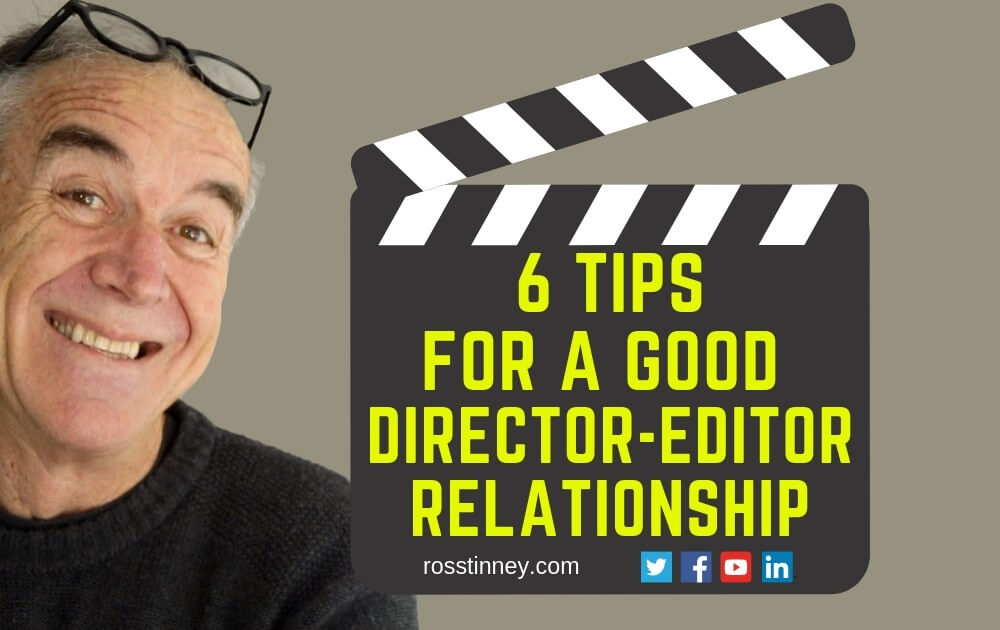 (1957 words – 7 min read) When you are on set, and the shoot is pumping out scene after scene … and I’m talking about any genre of film— TV commercials, short films, corporate videos, or full-length movies—the last person you tend to be thinking about is the editor. So how to create a good Director-Editor relationship? 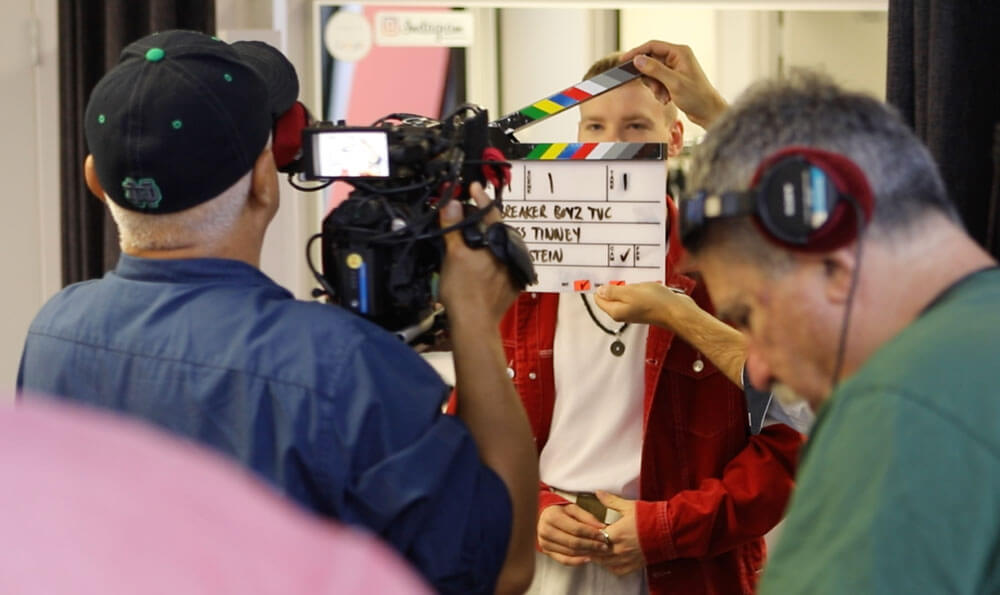 Trust me, the time that film editors spend on your project can vary as a direct result of the state in which you deliver the rushes to them.

Shooting in the film format is generally done with double system—that is when you are recording sound independent of the film; a camera slate is used which offers a concise sync point for the editor.

When I am on set shooting with the Arri Alexa or Red or Black Magic camera, I am always asked by the camera assistant, “Rosco, do you want to slate every scene?” He knows that both the visuals and the sound are recorded on the hard drive, with an audio back-up on the soundman’s digital system. My answer is an unequivocal, “YES!!”

There is nothing better than pouring through the rushes with an editor, detailed log sheet in hand, and quickly identifying the best takes, with an eye for a favourite or two. The offline editing process is eased greatly when you have slated each take, and can refer to them directly.

Shooting with DSLRs is a little challenging in the sound department. They require an external hard drive to record the sound independent of the camera. Yes, you most probably know all of this. But even so, adding the slate into every frame is a priceless saving down the track.

But you would be surprised at how many shoots I hear about where the director has opted to forgo the slate, as it interrupts the talent’s performance, or, wastes time.

Why slating every scene?

Spare a thought for the editor at this point: foraging through hours of footage without any visual reference or sense of performance rating. Yes, the editor could simply go to the last take of each scene and assume that, after much persistence and perseverance, the director finally got the performance out of the talent that made everyone happy.

But that doesn’t always translate. The director could have been exasperated by this point and, seeing his schedule slowly imploding, decided to take the last take as his last resort and move on, knowing that he had some marginally better takes from earlier on.

This is assuming that he has cleared this move with all stakeholders prior to uprooting and clearing out.

Whichever way you look at this, the editor is in a quandary. Which take is the director’s preferred? She or he is proceeding blind.

2. Facilitate the editing of special effects

Also, don’t forget, when you are shooting intricate special effects scenes, make sure that you have plenty of background plates, clean plates.

NO!!!! Shoot as much in camera as possible. You don’t want to have to go back for pick-up shots (choking of budget), or end up with a shonky patch-up job (credibility), or a brilliant patch-up job that takes an extra day or so in post to achieve (financial free fall).

3. The Editor: prepare for the job

I think that if the editor has done their job, they would have done the following in pre-production:

I am a very loyal person when it comes to editors—all film crew, in fact—and I am happy to stick with the people who:

How you connect with your editor is absolutely vital. An editor who takes criticism and is not defensive is important. We are all creative, we all like to be liked but accepting constructive criticism from others is out and out character building and a basic pre-requisite in film-making.

I have overseen the edit of hundreds of films over the years. The biggest pleasure I get when arriving to an edit session is to sit down and instead of preparing to start the laborious process of shot selection and rough cutting, the editor has already:

You have no idea how great that makes me feel. I get goose bumps just thinking about it.

This makes for a strong Director-Editor relationship, let me tell you. And no, the cuts are not always perfect, but the editor gets massive brownie points for being totally prepared, and has shown keen initiative.

This efficiency leaves extra time to play, to experiment, try other options, other music and be ready to blow the agency away with options.

Not too many mind you. The last thing you want to do is confuse them but generally what happens is the agency will shortlist their preferred, assuming they like what you are offering.

6. Editing for advertising: stick together on presentation day 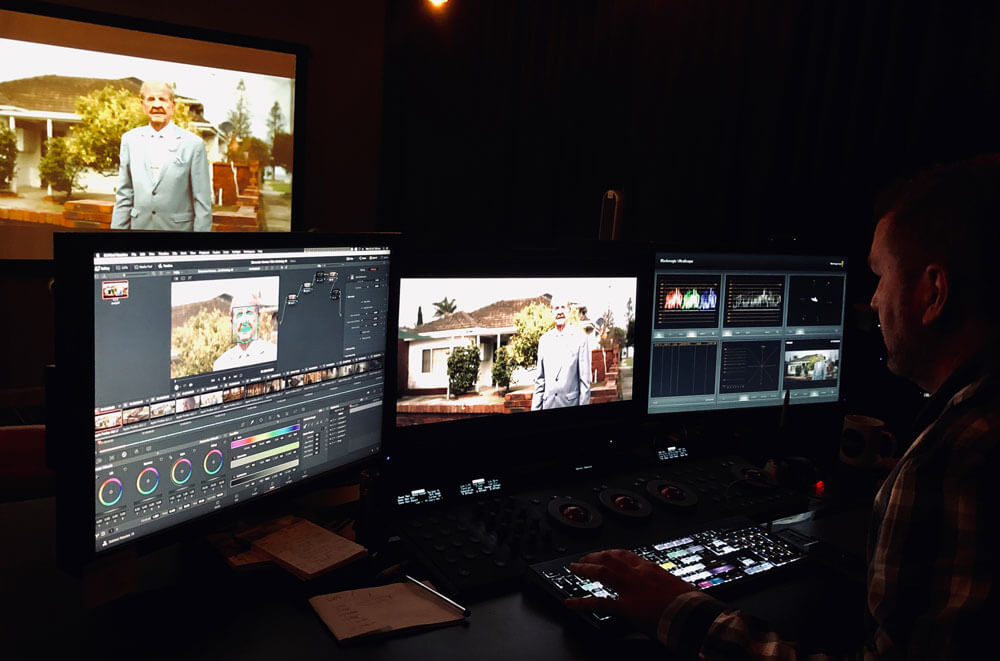 Usually when presenting an offline version of an ad or corporate video for the first time to agency / client, the director and editor are present in the edit suite. Having followed the approved storyboard and blocked your shots, things generally tend to go well.  But warm and fuzzy reactions aren’t always the norm. On occasion, I have also been on the receiving end of the cold and silent treatment. And trust me, for an editor and director, that can be a very lonely place to be.

The cramped edit suite suddenly becomes a sweaty political minefield of stabbing, steely eyes and toxic whispering. This is where the Director-Editor relationship proves to be extremely important. Remaining calm and part of the solution is vital, not lowering yourself into the “blame game abyss.”

Others will; you must not.

The editing room, the colour grading room, and the finishing suite are volatile environments. It’s the end of the road where all the egos come together, probably for the first time in the whole job. Maybe the second time; in the pre-pro and now. They all look at the final product.

Everything that the director says he is going to deliver is all on display. And it’s probably the first time that the client gets the whole picture, starts to get where we’re going to. And that, I believe, needs to be managed by the editor. The whole environment where everybody’s sitting can be very volatile, and nobody knows who has the say with who, apart from the producer, who probably knows everybody in the room.

So the editor needs to be able to pick off who is who. Ok he’s the creative, this guy’s the client, she’s the suit…and be able to get those people to communicate with each other. To know who to talk to, when to talk, know when to speak to the director, know when to speak to the client. Know when to say nothing will probably be the most important thing. Because that is when, 99% of the time, a junior editor will go and open his or her mouth at exactly the wrong moment, and you feel the whole room go crash. Then the client goes, “Is that blue really a problem?” And everybody is going, (under their breaths) “Oh why?!?”

It happens too often, and that’s the skill, over and above the creativity of editing. It’s that approval process and that subtlety in an approval.

Working with the director is also a tricky thing. When a director comes in and cuts with you for the first time, it’s his ego that’s on the line here. Even though he might have shot a crock of shit, you’ve still got to get the best out of it; be enthusiastic about it and be sure you can the very best for that production. And that can be tricky to sell.

Interestingly though, in pretty much in every case, the stakeholders handing out the chilly silence are generally the identical faces who approved the director’s board, signed off on the talent, wardrobe and props and ticked the boxes on each shot on set.

Now this is assuming, that in every case, the editor and I have delivered what the agency was expecting, not some freakish, left field interpretation with no match to what they envisaged.

How and when to present editing options

Don’t get me wrong, I think it is a positive thing to offer up an alternative to the approved version, but please make sure you have first presented the version they are expecting before suggesting a quirky director’s cut.

And throughout this situation it is imperative that the Director-Editor relationship be strong and they remain tightly united while shots are swapped, alternative takes are sought and the solution is found, when, all going well, smiles and positive vibes return to the room.

Make sure you define who all these people are.

Director and Editor must manage expectations

Presentations are trying and stressful moments, no doubt. You are entering a room of teams and solo players, each with varying wishes and results. Some are driven by their desire to create an award-winning image of their idea, another by marketing and research data, another wanting to do the best for their client at whatever cost, some to make money and some, sadly, driven by no opinion whatsoever, feeling that the wife or husband’s opinion the night before is sufficient to make them feel important and knowledgeable. They have no idea. So your effort in the preparation will help alleviate some of that stress and guide the process and people to the best possible outcomes.